/Mouritsen /Mouritsen A/S helps nature on its way with a new project in Vejle
Published: 18/05/2022 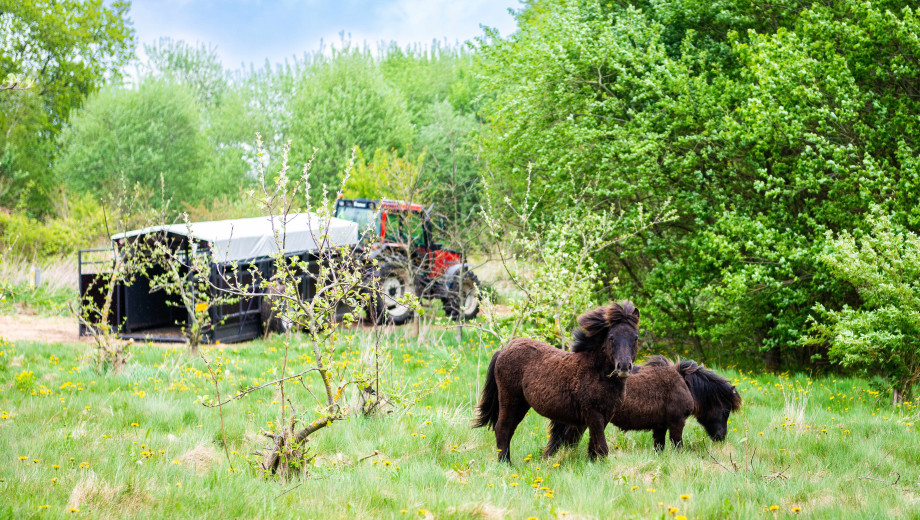 At Mouritsen A/S, we are now trying to make an active effort to increase the biodiversity in the local area by letting horses graze one of our areas - to the delight of both nature and coziness.

More wild nature must enter the villa gardens and the industrial districts to save the many animal and plant species that are in danger of extinction.

The Shetland ponies Blomst and Pixie got a new home and lots of grass to munch on when they were let loose on Wednesday 11 May on a 10,000 m2 area owned by Mouritsen A/S adjacent to our domicile.

As part of a pilot project that Mouritsen A/S is initiating together with municipality of Vejle, the two ponies must help increase biodiversity on the grassland by eating the grass and thereby create better conditions for other types of flowers and plants to grow.

"Two ponies on a grass field obviously make no difference in the big climate score, but we see it as a good example of how we as a company can work with sustainability in everyday life and help draw nature into the local environment," says Claus Andersen, managing director of Mouritsen A/S.

Good for both biodiversity and the climate

Mouritsen A/S bought the 10,000 m2 area a number of years ago in order to secure enough space for a possible future expansion of the company's domicile.

Several years ago, we planted the area with apple trees, and initially the grass was neatly cut and kept down. In recent years, however, we have chosen to let the grass grow more freely to increase biodiversity, and with the arrival of Blomst and Pixie, we are now going one step further.

"The horses eat the old, dead grass and thus make room for other types of plants and flowers. It attracts insects and other animals, and at the same time the plants also actually bind more CO2 than if there was just a lawn," explained Simon Lundbye Lykke from the farm Ravnsminde in connection with the two ponies being released.

The pilot project is the first of its kind in municipality of Vejle and is part of the VILDE VEJLE campaign, which aims to create a more wild and diverse nature in the municipality.

Responsibility and being a good workplace are two of Mouritsen's core values, and therefore it was an easy choice for us to join the campaign. Not least because there is also support for the project among the employees, emphasizes Claus Andersen. Mouritsen's staff will introduce a rotation scheme, so that the employees take turns crossing the road looking after and taking care of Blomst and Pixie.

"One should not underestimate the coziness and the good atmosphere that such a project can create in a company. Perhaps the most important benefit is in reality the conversations and discussions that the project can hopefully generate at home around the dinner table," says Claus Andersen.

"In any case, I hope that we can inspire other companies to set nature free in their local areas," he concludes.

VILDE VEJLE is part of Vejle Municipality's biodiversity plan 2020-2024. You can read more about the campaign at vejle.dk/vildevejle.